We've moved.  Come join us at our new location:

When automobiles were new to this country, they were a novelty. Since each auto had to be hand made (until Henry Ford) they were expensive, and they were only owned by the rich and/or famous.  In the late 1800s-early 1900s the horse was still the preferred mode of transportation for most people.  We probably all know people who have lost their lives in car accidents; one hundred years ago death by horse accident was not uncommon.

In my father's home town of Lacon, Illinois, the only person who owned their own car was the president of the bank.  One day in the summer of 1907, Ida Craig's sister, Dora Stinger Gibbs was riding her horse past the bank president's house as he was backing his car out of the driveway.  The car backfired, the horse reared, and Dora fell off, breaking her neck.  Horses and autos have never been a good combination.

Something similar happened in the story I am going to relate this week. Readers of the Chicago Daily Tribune of June 10, 1911 saw the following story: 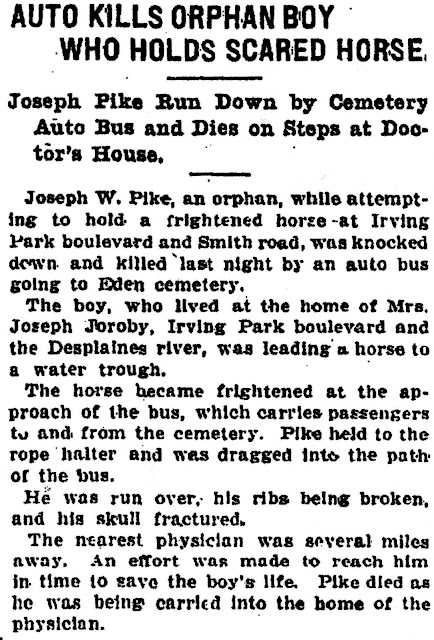 A tragic accident.  Let's see what we can find out about young Joseph W. Pike.

The 1900 Census shows the Pike family living at 1257 W. Lake Street. J.M. Pike was a building contractor.  They reported to the census taker that they had had three children, but that only two, Joseph and E.P. survive.

By the 1910 Census, thirteen year old Joseph was living in Leyden Township and working as a farm hand.  The farm was off of Irving Park Boulevard and belonged to Joseph and Annie Jacoby (the "Joseph Joroby" of the article above).

The article about Joseph's accident says that Joseph was an orphan, so we can assume that both J.M. and Saraha were dead before 1910. The Cook County Death Index does show that a Joseph Pike who was a bricklayer died April 9, 1902 and is buried in Rosehill Cemetery.  No mention of a Saraha Pike dying and I know that I won't be able to get any information from Rosehill, so we'll assume the newspaper account to be correct.  Also no further mention of Joseph's sister, E.P. Orphan children were not uncommon in those days, and if not taken in by relatives were often left to fend for themselves.

According to his death certificate the accident took place "on Irving Park Boul abt 1 mile East of Des Plaines River."  A bus was run by Eden Memorial Park Cemetery that would pick up mourners or potential customers and deliver them to the cemetery at 9851 W. Irving Park Road in Schiller Park:

Here's what a bus of that era looked like: 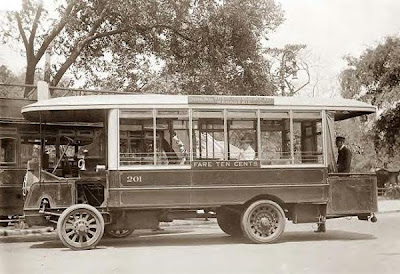 At the time of the accident, Joseph was leading a horse to a water trough on Irving Park Road, about 1 mile east of the Des Plaines River. As the bus passed, the horse got spooked, Joseph fell back into the path of the bus and was killed.

As you can see, the death certificate lists the cause of death as "Shock & injuries received by being run over by auto bus on Irving Park Boul abt 1 mile East of Des Plaines River."

I have put together a map showing all of the pertinent locations for this story.  I have marked the Eden Cemetery, the Des Plaines River, the accident site (1 mile East of river) and the location of the doctor's office where they took Joseph.  None of the distances are far today but this was over 100 years ago.  The farther west you went on Irving Park Road, the more rural things got, until all you saw were farms.  The onlookers raced to get Joseph to the doctor in time to save his life, but his injuries were so massive that I bet even today with all our First Responders and equipment, he would not have survived. 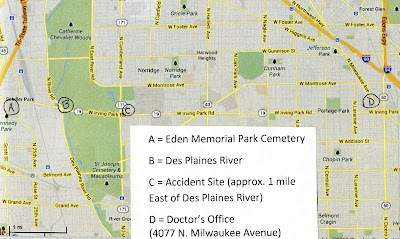 An interesting aside - where the Jacoby Farm was, is now under one of the runways at O'Hare International Airport.

Joseph was buried three days after the accident - at Eden Memorial Park Cemetery - ironically the owner of the bus that killed him.  I doubt that he had any money for a grave - perhaps Eden donated one considering the circumstances of his death.

Unfortunately if anyone put a marker on Joseph's grave, it is long gone. It took me two trips to Eden Cemetery to verify it, but Joseph Pike's grave is unmarked.  He is in Section 1, Plot 303: 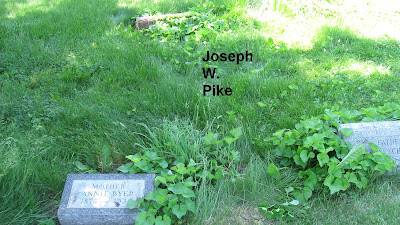 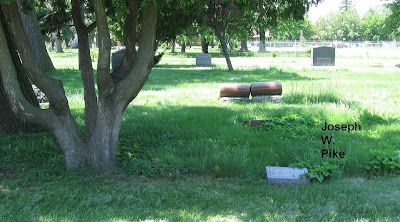 So that's the story of a boy who was in the wrong place at the wrong time.  Were it not for the census, his death certificate and a newspaper account of his death, we would never have known that he lived.  Even his small grave in the shadow of a large old tree is unmarked.

Well, Joseph W. Pike, we have not forgotten you and your short life. We don't know alot about you, but we know that you died too soon.

May Joseph W. Pike, gone but not forgotten, rest in peace.
Posted by Jim Craig at 5:17 AM 3 comments

We've moved!  Please join us at our new address:

THE DAVID LIVINGSTONE OF METHODISM - Joseph Crane Hartzell - Part I

We've moved!  Please join us at our new address: